I wanted to find out.

So I bought both riflescopes and hand-tested everything: glass quality, reticle, durability, turrets, tracking, and so much more.

By the end of this Vortex Strike Eagle vs. Primary Arms 1-6x review, you’ll know which riflescope is best for you.

The Vortex Strike Eagle 1-6×24 is a great entry-level scope.

It’s made from aluminum with an anodized black finish. It’s lightweight and durable, built to throw into a gear bag or dropped on the ground.

This scope isn’t fussy and is reliable shot after shot, even after it’s knocked around a bit.

The Strike Eagle ships with scope covers installed, and the glass is waterproof, fog-proof and shock-proof.

The lenses are fully multi-coated, the highest quality protection that a lens can have for clear sight even in low light conditions.

For the price, the Strike Eagle has some of the highest quality glass on a scope.

At the lowest magnification, there’s almost no distortion, just at the very edge of the glass.

Distortion increases up to the 6x magnification, but you can rely on the scope for accuracy up to about 300 yds.

For regularly shooting targets over 500 yds, you’d need a longer range scope like the Vortex Crossfire or Diamondback.

It’s great in situations where speed is more important than precision at long ranges. That said, it’s still a versatile scope.

The Vortex Eagle has capped turrets and have ½ MOA clicks, adjustable up to 140 MOA in either direction.

Because of the cap you can’t adjust the MOA on the fly, but this scope works well in situations where you set the elevation and the windage to zero out and then don’t readjust.

Adjust the knobs by hand, no tools necessary, and the adjustments are tactile and make audible clicks.

The Strike Eagle uses a Second Focal Plane (SFP), and a centered halo for fast target acquisition. The etched BDC is only accurate at the max range of 6x.

The design is specific for the AR-15, so for other rifles/ammunitions it’ll take time at the range to calibrate the zero. A SFP is ideal for busy environments, and some would argue that it provides better accuracy than red dot sights.

At 1x, use the outer rings for hitting multiple targets quickly.

At mid-ranges use the inner lines for greater precision, but set the scope to 6x for the greatest accuracy from the BDC hash marks.

The hash marks illuminate with 11 power options for low-light and nighttime shooting, the illumination washes out in direct sunlight. The BDC runs off a single battery, with about 150 hours of life, at the maximum setting.

One thoughtful detail on the scope is a spare battery compartment under the turret cap, in case you haven’t carefully tracked those 150 hours of battery life.

Adjusting the magnification is intuitive from behind the scope using the raised knob. At the front of the scope, the raised fast-focus dial turns for focal adjustment and it’s easy to make sure the reticle is always sharp.

Vortex designed the Strike Eagle for competition shooting and it excels in situations that require speed and variable ranges.

For the same reasons, it’s good in hunting and self-defense situations.

In short: the Strike Eagle 1-6x performs reliably in a wide variety of applications.

It’s a favorite among 1-6×24 scopes, especially at the price point.

It’s constructed from a 6063 aluminum alloy, coated in anodized matte black. Without a mount, the scope weighs 16.9 ounces and is 10.04 inches long.

The aluminum tube is nitrogen purged, and the glass lenses are waterproof & fog resistant.

Primary Arms ships the Gen III with lens caps installed, and the lenses are fully multi-coated.

The glass is clear and provides true 1x magnification on the lowest setting (not drifting into 1.2x or 1.4x as can happen with other models).

It uses a second focal plane and Primary Arms developed an Advanced Combined Sighting System (ACSS) reticle for this model.

There’s no distortion in the lens. At 6x the lens remains clear even at the edges.

It’s the most high quality glass available at this price point, making it great as both an entry level scope and for skilled competition shooters.

Caps cover the windage and elevation turrets and the knobs make audible and tactile clicks at ½ MOA.

You’ll find that after you zero in with the knobs, you’ll cap them and never touch them again.

There’s a spare reticle illumination battery compartment under the windage cap for emergencies.

The magnification ring is very easy to turn.

And the modestly priced optional throw lever for the ring significantly improves speed while setting magnification. Definitely worth the investment. 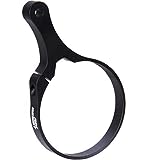 Scope Throw Lever for Primary Arms 1-6x24 Scope Gen 2 and 3 Does NOT FIT Raptor/Platinum
$28.99
View on OpticsPlanet View on Amazon

The thing I liked most about this scope is the ACSS reticle. It revolutionized the technology in low power variable optics.

The ACSS combines BDC, wind holds, and range estimation to integrate seamlessly with the use of the scope.

The ACSS includes a primary ranging tape in the lens that gives you estimated range on combatants, and dots for moving targets, placed for accurate targeting of a man running with a rifle (8.6 mph).

There’s ranging dots set in the scope to estimate the range on targets 18-inches wide (the average width of a man’s chest).

The chevron center of the reticle offers fast targeting at any range.

Because of the infinitely small point, it’s the simplest and fastest way of targeting at range. The illuminated red reticle has 11 power settings that don’t bleed or halo in the scope.

The Primary Arms 1-6x excels at targeting at various ranges. There’s no distortion even at 6x and because of the ACSS, it’s easy to target at close and long range quickly.

First, the illumination is brighter. And second, the glass is slightly clearer than the Primary Arms. Second, I’ve found Primary Arms’ ACSS reticle to be easier to use than the BDC reticle.

That said, the Primary Arms 1-6x is still a great scope.

In fact, I’ve been using one on my long range rifle for the past three and half years. That’s because I really like the ACSS reticle.

But if I had to choose one, I’d go for the Strike Eagle.

At the end of the day, they’re both high quality mid-range scopes that will serve you well for their price point.

Considering the next grade of scope is two to three times as much, both entry level scopes will serve you well in competition, hunting, and home defense.